For a color as deep as the sea, go with this dark blue press on set! Can you feel that Sea Glow surround you already?

Write a Review
average rating 4.9 out of 5
Based on 55 reviews
100% of reviewers would recommend this product to a friend
Customer photos and videos
Open user-uploaded video and review in a modal
55 Reviews
FC
Fabi C. Reviewed by Fabi C.
Verified Buyer
Reviewing
Wedding Season
I recommend this product
Age Range
25 - 34
Rated 5 out of 5

These nails are so pretty and professional looking! I get so many compliments on them. On the box it says they last up to 10 days...but mine start coming off after about 4 days. I always have to carry some glue with me with I go out because I never know when one is going come off. But the nail doesn’t look as good once it’s re-glued. I really wish they lasted longer (at the very least a week) because I love how they look.

Hi. Nicole. We are sorry to hear your nails popped off prematurely! If you apply an ample amount of glue onto your entire nail bed, as well as a generous drop of glue onto the nail itself, this should help with adhesion! We unfortunately do not recommend re-applying a nail once it has popped off, as they are intended for one use only.

These nails are bomb! I wore them for 14 days and still had to soak them for a bit to get them off. The glue is solid and the nail is super nice. Highly recommend these and will use these as my for to!! 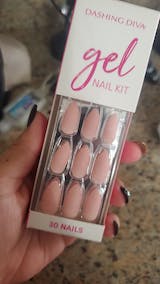 N
N.
Works great for me

I don’t know what’s wrong with these other reviews. Maybe people don’t know how to apply the nails or what not. For me personally, I do not use the glue that’s included in the kit. That is nothing against Dashing Diva; it’s knowing that that particular glue does not hold well for my nails. Because I work in healthcare and I’m constantly washing my hands all day as well as using hand sanitizer the type of pink glue that is included with most press on nail kits just isn’t strong enough. I use a stronger nail glue that is easily found at a popular beauty supply store with a lady’s first name. It comes in a metal tube with a yellow stopper.

Secondly, I make sure to prep my nails properly ensuring that I file, trim, push back cuticles, buff etc. Lastly, when you are applying this kind of nailIt is imperative that you placed glue on both the false news as well as your nail to ensure no air bubbles.

Using this method I routinely get at least seven to ten days wear out of these nails. I could go longer but I typically get wanderlust and I’m ready to change after about a week or a week and a half. I have used three different patterns of these gel nails, two Valentines and the one in the picture and I have not had one pop off, never had one break, and they actually are usually still pretty well adhered when I go to remove them.

For me personally they are a winner. I also like that they are available in longer lengths and widths. Even though I typically cut them down and file the sides/edges – filing this area is imperative to ensure that they fit well which will allow a longer lasting manicure as well as ensuring that they appear natural – I don’t mind doing that. I have very long nail beds which are slightly wide as well. Many of the store brand press on nails won’t fit my nails even if they are so short that they are trimmed below the quick.

Personally, I don’t think they need to change much about this product. If anything my only recommendation would be a better nail file and better glue. Maybe then more people would get a lasting manicure? 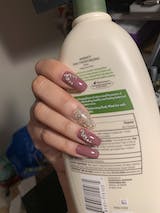 I really wanted to love the glue on nails but was so disappointed! I'm a fan of the Magic Press nails but decided to give these a try when the Vday designs were released.

First thing I noticed was how thin they are. They bend way too easy. I bought a pack of Acrylic nails on Amazon that came with 100 nails in lots of different sizes for a very low price and they were much more sturdy than these. I put just a bit of pressure on these and they break.

Second thing I was not happy with, the sizes. I had a really hard time finding the right size for some of my nails, especially the thumb. They are way too big!

I think the DD Glue On line could be great if they just tweaked it a bit. Make the nails stronger. There's companies selling cheap on Amazon that can do it, so DD can too.

I love the designs though, as always they are beautiful. Unfortunately though, until they fix the issues I mentioned, I won't be buying more.

Wanted to also add, I emailed DD about these problems, they responded quickly as usual which I appreciate. They also offered a discount, which is nice, but they went on to say that these nails have been tested and they are satisfied with them. I think it would be best for them to read the reviews though because clearly there is an issue.

These lasted me 3 weeks and still looked new. I will buy again. Lots of compliments. I have know idea what is wrong with these other reviews but these worked great and looked incredible! Proof is in the picture. 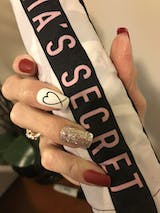 123
Thanks for contacting us! We'll get back to you as soon as possible. Thanks for subscribing